Select a Page:
Scroll to top

Protect the Bling: 3 Key Ways to Not Lose Your Engagement Ring

Some say its the most wonderful time of the year. It’s difficult to dispute. One thing that seems to be apparent is that many individuals get engaged around this time of year. What could be more romantic that a family-centric holiday proposal?
Some brides-to-be have their wishes come true in other ways. Sarah Anderson, for example, had her prayers answered after she lost her engagement ring. The Chillocothe Gazette features her story in an article from Saturday, December 17. Sarah took her ring off after pumping gas at a gas station to sanitize her hands and forgot to put it back on. Some media exposure led the acquirer of the ring (a man who found it on the pavement at the gas station) to return it to Sarah. 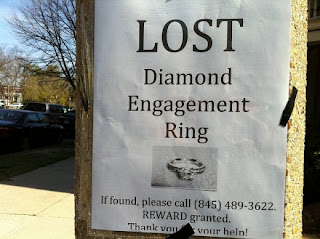 But we can’t help but ask ourselves, business-savvy brides, why was the ring off in the first place? Sarah recognized her flaw when she said, “How could I have done something that dumb?” Dumb it was, Sarah.

Unfortunately, this is a storyline that many brides have to experience in order to know. But for those of us who would prefer to not feel the panic attack of misplacing a very expensive ring and future family heirloom, follow these 3 steps:

Do you think Sarah was dumb? Is it normal for a bride-to-be to lose her ring at least once? Share your thoughts in the comments below.

Picture Source: Fan of the fan

How much will my wedding cost? 2 approaches to setting a wedding budget.

Be a Grateful Bride: 5 Ways to Give Thanks on Thanksgiving